A downloadable game for Windows and Linux

Polysporia II is a swarming evolution simulator that simulates microbial life. Each organism fights for survival and reproduction. Mutations occur and alter genetic lines for better or worse. This is a fast-paced simulation, so you can expect to see explosions of life and death. With a variety of settings you are able to tweak and control the simulation to your liking.

There are three root types, or classes, in this simulation. Carnivores, Herbivores, and Producers.

Producers, or plants, are the green organisms. They are incapable of moving (flagella) and stealing energy (stylets). They get energy from photosynthesis with their green segments. The more green segments, the easier they will gain energy. They are, however, easily killed by herbivores. They may evolve defenses, which will cost them energy to use.

Herbivores eat plants. They are distinguished by their head, which is a yellow square. They can only eat plants (unless you turn off "attack like types"). They gain energy by bumping their heads, or "mouths", into a plant. They can also evolve a stylet (red "sucker") segment to steal energy that way. Those may be more effective, but are more costly.

Carnivores eat herbivores. They can evolve all the same segments as an herbivore can. Due to the natural balance and hierarchy, you will notice different evolutionary strategies in carnivores and herbivores, despite having the same types of segments.

White - The head of a carnivore. Used to eat herbivores.

Yellow - The head of an herbivore. Used to eat plants.

Red - Stylet. Like a mosquito's sucker, it steals energy.

Orange - Grip. Each orange segment evolves a set target segment color to latch onto. If it touches its intended target, it will temporarily stick to it. It will have a tinted orange hue during this time. If its target dies, or the timer runs out, the hold will disappear and its color will return to normal.

Purple - Venom. This is a stinger segment that won't cause damage but will temporarily stun other organisms. When afflicted, an organism will be tinted purple and completely immobilized. It will be unable to inflict any damage on other organisms during this time, even if one bumps into its spikes or mouth.

Green - Chlorophyll. These make up the body of a plant and provide photosynthetic energy for the organism proportional to the are of the segment. Plants don't have heads.

Brown - Flesh and Flagella. Flesh segments are inert parts of herbivores and carnivores. They only add to their structure. They are very low cost, though. Flagella are almost the same color (actually a slightly different shade of brown) and allow an organism to move. They cost more than a flesh segment does.

Each segment's costs and strength can be adjusted in the Costs menu. The cost is an upkeep which drains on the organism's total energy (or health). These costs are always multiplied by the Decay Rate, which gives a more global control over things.

Strength of attacking segments is derived from their area. Larger spikes will do more damage. Global strength, like Decay Rate, is multiplied to with all strengths during any collision.

Flagella segments allow herbivores and carnivores to move around. They are able to evolve their own movement patterns and rotations. Because the simulation uses Box2D for physics, the torque and forces of movement are very realistic.

Mutation Rate will determine the probability (out of 100) that an organism's genetic code will mutate. There are many aspects to an organism's DNA, from the length, width, and color of segments, to the precise thrusts of its flagella. A low mutation rate will generally create a more stable environment with slower changes.

-Tracking menus. Click on an organism and the camera will follow them. A small window will appear allowing you "God controls" over them. You can give them energy, kill them, make them reproduce, etc.

-Organism Catalog. Save genetic data to your index for cataloging. View organisms in your collections in a separate menu. You can scroll through them, see screenshots gifs of them in action, and name them. Then, drop them into a live game at any time.

-Genetic lab where you can design your own organisms. These will be automatically added to the catalog and also able to add to live games.

-Presets. For example, certain settings tend to produce agile worms and jellyfish-looking organisms. Presets will be provided and the user can add their own as well. 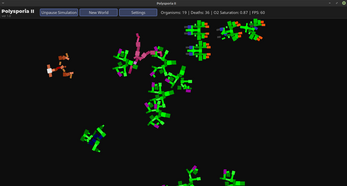 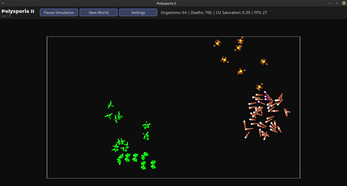 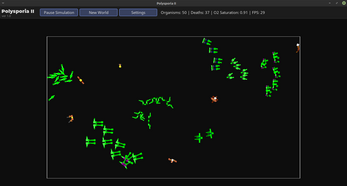